Home » Sex, and why the “blank” can’t Hebrew schools fix themselves? 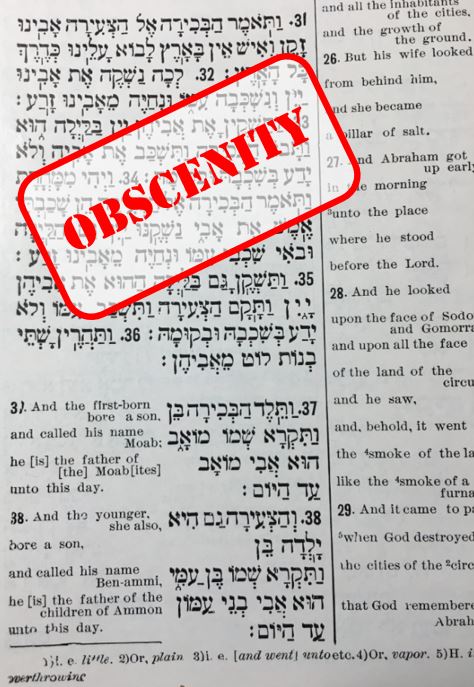 Lessons of censorship, Bill Gates, and a whirling dervish

Stop complaining about logistical challenges, lack of available teaching talent, and unmotivated students. If you really want to find a way to fix our Hebrew schools, let’s start by discussing sex.

A few years ago, I decided to tear through our basement filled with boxes of books and tchotchkes that have followed our family with each move over the decades.  It was time to ditch.

Old college textbooks and a couple of unused woks given to us as wedding gifts (we apparently were married in the Year of the Wok) quickly found their way to the thrift shop.

In one of these boxes, a worn, duct taped book caught my eye.  It was my first grade Hebrew school translation of the book of Genesis, copyright 1905.  The translator was Joseph Magil.

The Magil Chumash was the primer that Mrs. Saul and Mrs. Joselit, my extremely dedicated first and second grade teachers, used at the Hebrew Institute of University Heights in the Bronx. (I recall Mrs. Joselit telling us how she kept a small notepad by her bed to jot down middle-of-the-night teaching ideas she otherwise might forget by morning).

But, as committed as both were, they deftly steered around the many stories that had anything to do with sex.

Not that I would have really noticed at age six, but Mr. Magil helped them avoid the sex minefield by failing to translate certain lurid passages.  Flipping through the linear Chumash, here are a couple of the half-dozen notable blanks I rediscovered.

Remember when Abraham’s nephew, Lot, saw his city of Sodom destroyed? Lot’s daughters, believing they and all of civilization were about to end, got their father drunk, and… Well, all I can say is check out Genesis, Chapter 19:31-35.

Just eleven chapters later (Chapter 30:14-16), Magil mysteriously fails to translate the passage about an aphrodisiac and Rachel’s jealousy of her sister Leah (both married to Jacob, as you well know.  An awkward and not so kosher scene to teach in the 1950s when chaste TV couple, Ozzie and Harriet, each kept their respective beds in different zip codes).

The truth is that Joseph Magil had reasons for selectively withholding his translation. There was pressure from leading Rabbis to translate only in Yiddish.  In addition, he faced censorship and possibly jail time if he violated obscenity laws, such as the 1897 Comstock Act – even if his material came from the Bible.

Joseph Magil was a genius. He was also a cultural outsider, who entered the American Jewish arena more like a whirling dervish than a staid intellectual. He mass-published his Genesis translation by age 28, and another half-dozen translations over the next few years. Mind you, he had only arrived from Lithuania seven years earlier, speaking Yiddish, Russian, German, and Hebrew but little English.

That said, Magil knew he had to tread carefully and deliberately in his Bible translations; obscenity laws pressuring him on one side and Yiddishists on the other.  His “blanks” made sense in 1905.

He really faced a content delivery problem.  Ironically, so do we today.   The question is why?

In 2020 we all have access to lots of wonderfully curated, translated content. We just have fewer and fewer students who wish to receive it. Hebrew school classrooms are the chief “content delivery vehicle.” Unfortunately, they have been emptying out for some time as our teens enter high school.  (Not-so-fun fact: With Hebrew school attendance reaching its height at the bnei mitzvah year of 7th grade, nearly 86-percent of Hebrew school students drop out by their senior year.)

This past month I had a series of conversations about this singular challenge.

Everyone I interviewed listed the same three reasons for this dropout rate: (1) Over-scheduled teens. (2) Transportation, getting the kids to class.  (3) Finally – and most important – the low priority of Jewish education at least when compared to soccer practice. college-prep, and just about any other extra-curricular activity.

No one cited cost as the cause for declining enrollment.  As we might say in Boston, compared to day schools, Hebrew school tuition is a comparative “bahgin” at fees ranging from $500-2,000.

Exactly how do we recapture these teens, I asked each expert? Most important, why has a solution eluded us all these years?

Maybe what we need are more Magil-like whirling dervishes, they suggested, outsiders who enter Jewish education bringing with them new ideas.

According to Danny Margolis, who ran Boston’s Board of Jewish Education for nearly three decades, our students and their needs have indeed changed. He believes there needs to be a national systemic solution that must involve more than educators to craft it.

What Margolis imagines creating is a multidisciplinary think tank, akin to a Rand Corporation or a Broad Institute.

“I would love to see neuroscientists get involved.  I want to know how people are making decisions today. I would like to see how we break through all the preconceived notions and conventional wisdom.

Then Margolis stressed the need to deliver to today’s teens something they need and want – something for their resume, an experience they and colleges would view as unique and important.

“We need to provide high schools kids with an experience that is so profound that it transforms them. We need to give them something they want to convey on a college application,” said Margolis.

I also spoke with historian, Jonathan Sarna and Barry Finestone, CEO of the Jim Joseph Foundation, about filling the empty classrooms. Both had remarkably similar insights.

Jim Joseph Foundation funds many learning ventures.  In our conversation, which centered around day schools and alternative learning programs, Finestone was particularly excited about the collaboration among the educational, spiritual, and learning startups the foundation has funded. He specifically mentioned Hadar, an organization whose mission is to build in-person and virtual learning communities.

“I couldn’t tell you what Hadar’s New York headquarters looks like,” said Finestone, who attends its classes from his San Francisco home.  Hadar has thousands of other students just like the Jim Joseph CEO who are remote learners.

According to its CEO, Rabbi Elie Kaunfer, Zug, their virtual havruta one-on-one learning program, which served approximately 130 individuals in 2014 Hadar first acquired Zug. This year Zug matched over 2,000 learning partners from around the globe.

“Content is king,” he remarked, echoing a comment first made by Microsoft’s Bill Gates in a 1996 blog post. According to Gates, those who succeed in enticing audiences with content will do more than just distribute information, they will build community through a “marketplace of ideas, experiences…”

There are several remote learning initiatives that have tackled part of the problem.  Some provide online learning materials, curriculum, and even teacher training. Others have dedicated themselves to serving the small, scattered Jewish communities, as well as children of families who do not belong to a congregation.  These are all valuable services but appear to have failed to recapture the large number of post-bnei mitzvah dropouts – even those living in large metro areas with sizable Jewish communities.

Historian, Jonathan Sarna, has also thought long and hard about Jewish content and teaching talent and aimed his comments at educating high schoolers. He has begun to mentally draft a business plan for a supplementary education program and eagerly shares it.

Sarna, a graduate of Boston’s Hebrew College Prozdor afterschool program, is concerned with the quality and substance of today’s supplementary programs. He believes that many are failing.

“The reason we lost supplementary programs was the minute both parents went to work. Who’s going to take this kid to school during the week?”

He sees this as an educational rescue mission for high schoolers who have already dropped out of Hebrew school. These are crucial years, said Sarna.

He believes that every school today can have a world-class Tanach or history teacher.  Enabled by Zoom, one engaging, and well-paid teacher hired by many institutions, can inspire scores of students – particularly the post-bar/bat mitzvah teenager – no matter where they live.

At the same time, Sarna recognizes that distance learning has its limits and that kids still need to socialize and learn with each other and with their community.  That is why he suggests that Sundays become the day everyone gathers to review and discuss, as well as enjoy communal events.

According to Sarna and Finestone we need to imagine alternate, attractive ways to provide Jewish teens both a culturally literate and a contemporary Jewish education.

A large study recently completed by The Jewish Learning Project has identified four critical issues about which these teens wish to connect: (1) Who am I? (2) With whom and what am I connected? (3) To whom and for what am I responsible in this world? (4) How can I bring about change in this world?

Still, says Sarna and Finestone, you need to consider the talent to address these questions.  Both say the talent is there – but maybe not in your neighborhood.

Here is one out-of-the-box suggestion Magil himself might suggest.

Rewards? Sure, programs can offer a pre-Birthright trip to Israel.  But what about inviting the high achievers to privately meet and question their intellectual heroes from among the constellation of draft picks?  Maybe a teen can become a summer intern with physicist, Jeremy England, or study the arts with Mayim Bialik, politics with Rahm Emanuel.

Margolis, Finestone, and Sarna urge us to shatter our century-old Hebrew school model.

Can you imagine a 2020 unfettered, uncensored Joseph Magil responding to Bill Gates about this very subject?

Gates (quoting from his 1996 content-is-king blog): “If people are to be expected to put up with turning on a computer to read a screen, they must be rewarded…they need an opportunity for personal involvement…”

Magil’s fictional and uncensored response: “Reward? Involvement, Mr. Gates? If I could have translated the Chumash in the uncensored way I preferred, can you imagine the number of #*!@% involved teenagers I could have taught! If only I had today’s teaching tools in 1905 and been able to tap into a deep, nationwide talent pool, how I could have grabbed their attention and excited these kids…Now that’s involvement.”

Our Jewish community cannot not miss this moment.  Bring in the outsiders! We don’t need more blanks.