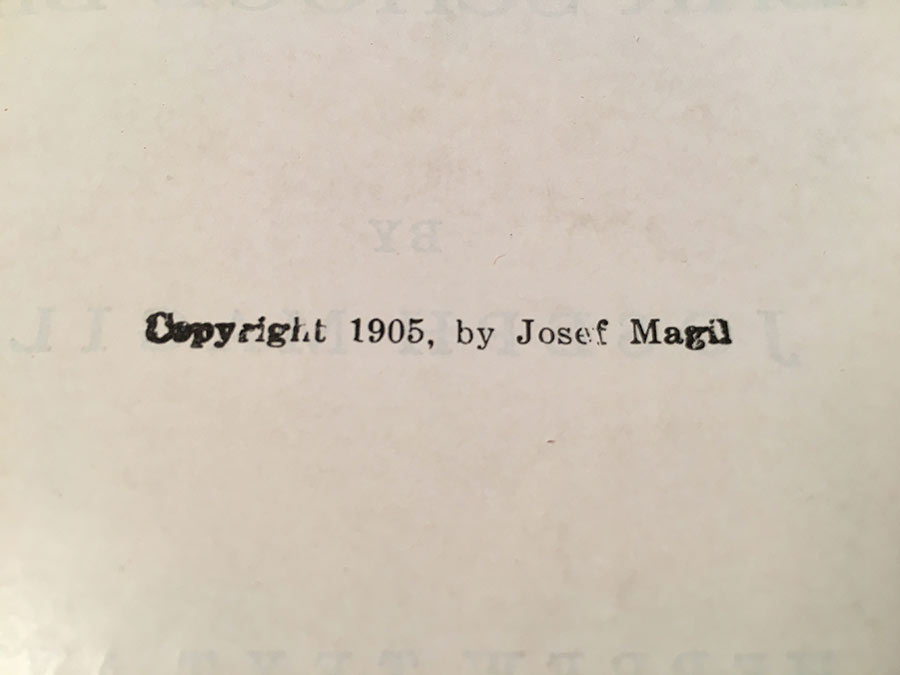 We don’t know much about the brilliant, restive Magil, except for the historical breadcrumbs he left behind.

By the time he was 40 he changed the way kids studied Chumash. He was publisher of a Yiddish newspaper at age 23. Opened a Hebrew-Yiddish school in Philadelphia around the same age.  And under a pen name authored many opinion pieces to various other Yiddish newspapers during his first few years in America. But he didn’t stop there.

As a 14-year-old yeshiva student who attended yeshiva in Kovno, Lithuania, he snuck away from class to secretly study modern Hebrew and Russian. He published his first articles at age 16 in local Yiddish newspapers, then on his own moved at age 19 to a town in Latvia to learn German and study German literature.

Magil’s big intellectual breakthrough really happened when he emigrated to Philadelphia in 1892.  There he founded a publishing company and started an equally dynamic family.  More about his family below.

Two years after arriving in Philly, he founded a Hebrew-Yiddish school and in 1894 began publishing a biweekly Yiddish newspaper, and eventually became editor of the local English-language Jewish newspaper. (How exactly Magil learned literary English only a few years after his arrival from Europe is a wonder.)

His real “lightbulb moment” came when he branded his approach for teaching young, American kids their mama loshen, Hebrew – not Yiddish.   Beginning with Genesis, he began publishing a series of linear translations that soon became a standard for Jewish day schools around the United States.

He continued to write and translate in Yiddish, but his linear English translations of the Chumash, the Haggadah, and the siddur, became his Jewish education legacy.

Even more extraordinary was his need to “beta test” his translations.

In a pre-data-driven world, Magil was an educator far ahead of time. He reported in the preface of his Genesis linear translation how he observed his class of 8- to 12-year-olds for six months. He studied their ability to absorb the meaning of the text. He noted that when he began, his students were “all destitute of any knowledge of grammar, Hebrew or any other language…in all cases the young students memorized, without the aid of their teacher, three or four times as much of the text and knew it much better than before, when the system of ‘talking into the ear’ by the teacher, until the young student knew it, was employed…”

Shortly after the Genesis translation, his books took off.  Using today’s lexicon, you might say they went viral.

His family was another one of Joseph Magil’s revealing breadcrumbs.

He and his wife, Rachel were among the founders of the Zionist movement in Philadelphia.  Global politics, Palestine, and a thirst for knowledge appeared central to the Magil family.

In that way, their four children seemed as worldly and as precocious as their father.  Their resumes included the founder of Young Judea, a leader in the American Zionist movement, the author of an early exposé of Father Coughlin and his anti-Semitic campaign, a leading journalist for the communist paper, the Daily Worker, and friend of Hollywood screenwriter, Dalton Trumbo, as well as Mexican surrealist painter, Frida Kahlo.

What a family, the Magils!   Can you image the rip-roaring conversations at their dinner table?

One of the last Magil breadcrumbs I found was in their youngest child’s obituary.  The article states that his son, Abe, was “born into a poor Jewish immigrant family in South Philadelphia.”

Poor? Perhaps Joseph Magil was poor in wallet, but invaluable in his ability to educate American Jewish children.